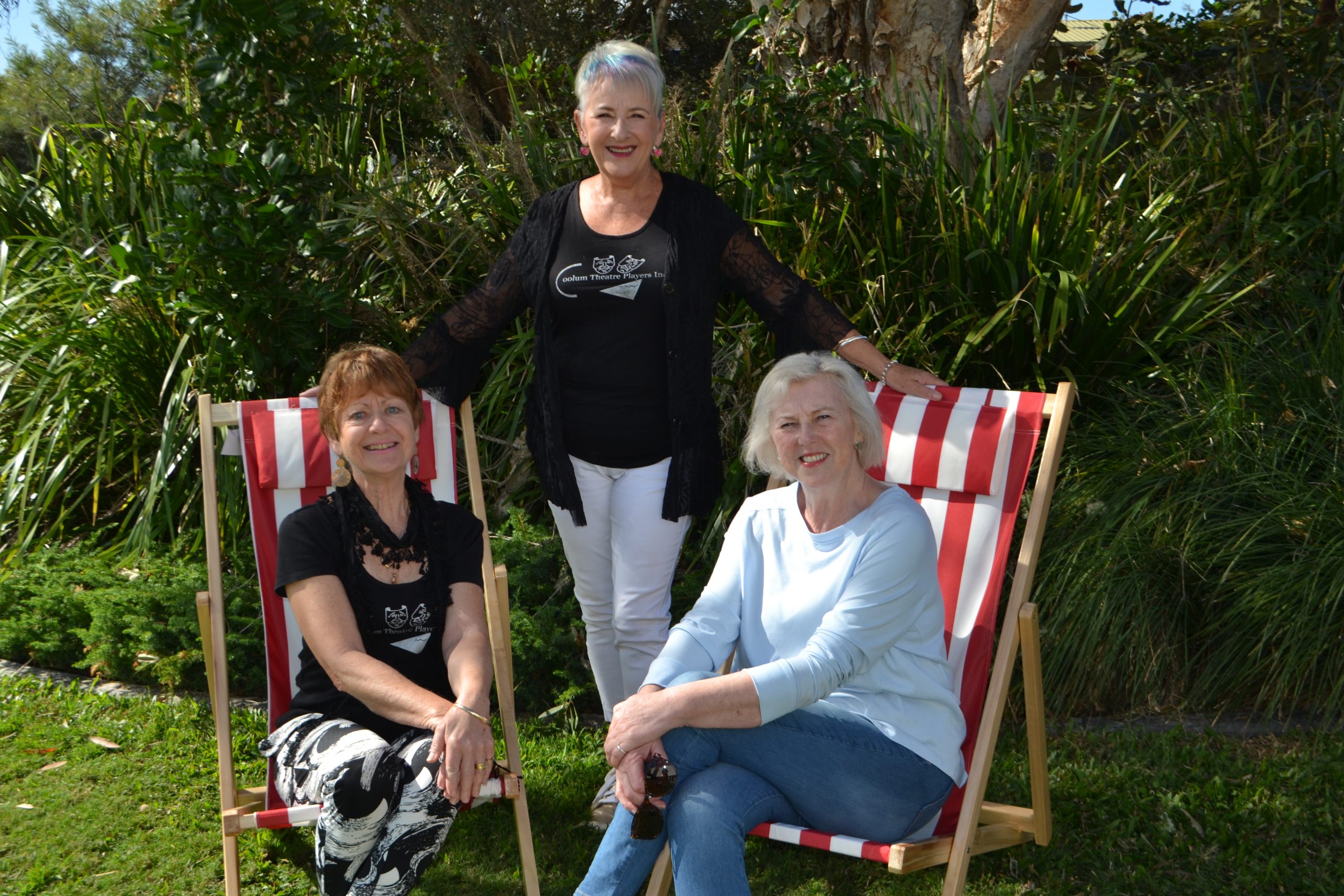 Deceit, drama, shocking revelations and hilarious comedy – How much can happen on two deckchairs on an English seaside?
Turns out quite a lot! Audiences are in for a rollercoaster ride when Coolum Theatre Players brings to town it’s upcoming production of “Deckchairs 1” , a show of 5 “playlets” written by Jean McConnell that are by turns funny, poignant and surprising.
Each short play is set on the same two deckchairs but with two different characters in the chairs each time, creating a sense in the audience that they’re in the taboo space of the eavesdropper on the various duos’ personal conversations.
Director, Barbara Ryan, (pictured right, standing) says the touch of drama in the program is something audiences at CTP may not be used to but is still wonderfully balanced with comedy and a hint of live music.
Giving a few details of the plays, Barbara said: “Shoppers” is a riotous conversation between two well-to-do shopaholics who let out a rather surprising secret, “Early Blight” is a heart-breaking exploration of a doomed mother/daughter relationship, “Dancers” wittily dissects the tea-dancing world of two skittish women, “Late Frost” is a drama in which a life-long friendship faces it’s biggest challenge and “Doggies” is a hilarious tale about two very different types of dog-owners.”
With a cast of many locals, Deckchairs 1 is Community Theatre at it’s best with the troupe, as always, putting in their “all” in terms of preparation (on-stage and backstage) and performance.
Cast member and part of the “Shoppers” duo Janet Marshall (pictured above right seated) said she loves being on stage but despite meticulous preparation actors still get nervous and if you don’t, then “you haven’t done it properly.” Julia Loaney, (pictured above left seated) who also plays in the “Shoppers” duo, says she ‘loves being on stage’ and ‘feeds off the laughter’ and ‘loves the interaction’.
Coolum Theatre Players welcomes interest from theatre-loving new members including backstage , lighting and front of house greeters. They’re currently particularly looking for a new member who’d enjoy volunteering to help with front of house .
“Deckchairs 1” is recommended for 18 years and over but children 15 years plus can be accompanied by a parent or care-giver.
Performance dates are at 7.30pm on Friday 16, Saturday 17, Saturday 24 July. Sunday matinees are at 2.00pm on 18 and 25 July.
Tickets are on sale now . Head to https://coolumtheatre.com.au/