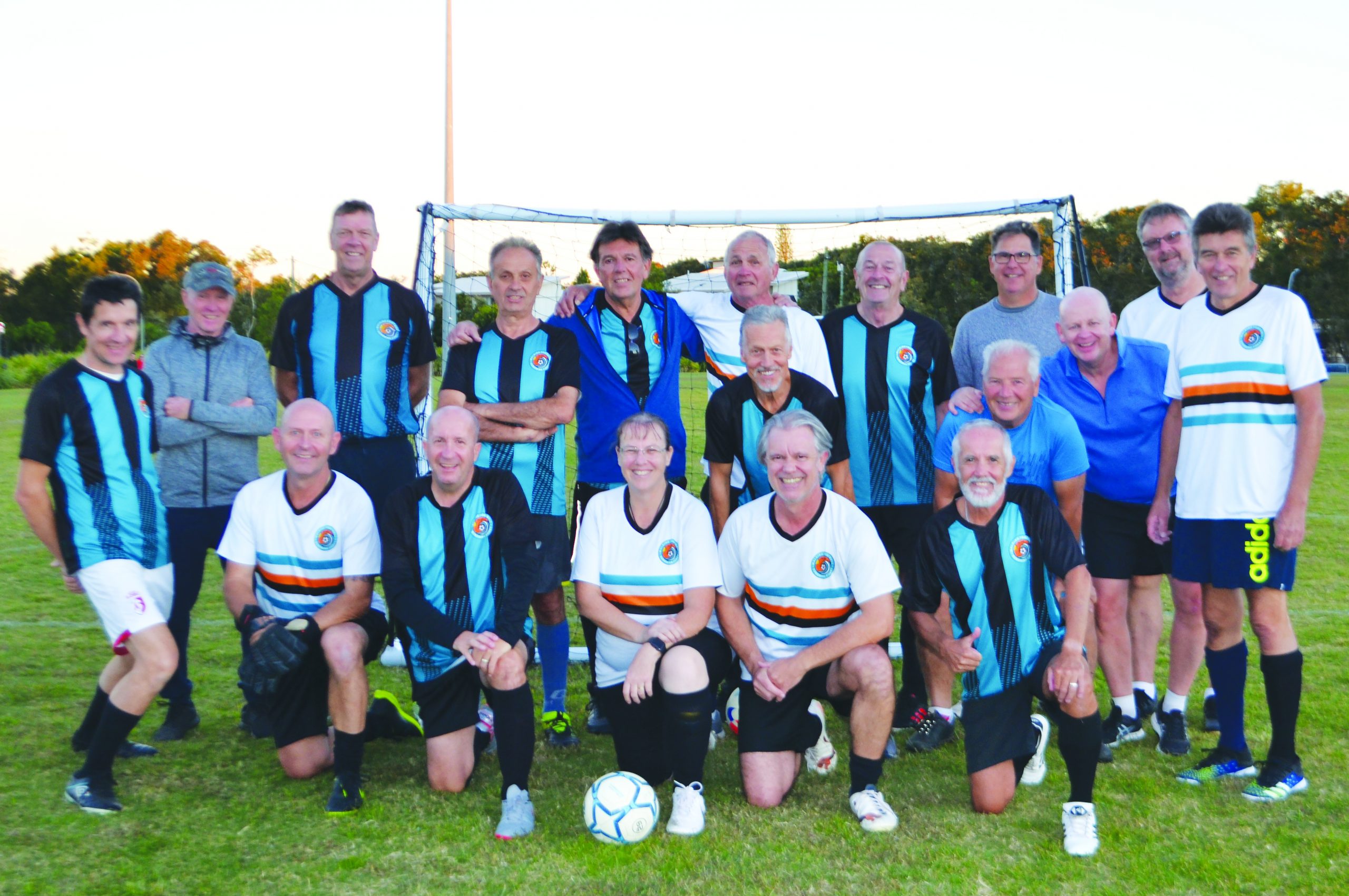 They won’t win the FA Cup for Football finesse, but one local group is kicking goals improving physical and mental health for older people.
Walking Football Coolum (WFC) team Founder, Dom Massoni, started the group around two years ago when his wife saw the sport on TV and thought he should give it a go.
There wasn’t one close-by so once he found a ground (thanks to the help of Coolum Baptist Church for the use of the soccer pitch behind the Church) he started a team in Coolum.
As a sport, Walking Football is said to be the fastest growing in the world.
It is a phenomenon that started in Scotland around 10 years ago bringing people, with willing minds and perhaps less willing bodies, together to participate in a game they might’ve played or watched when they were younger – combating social isolation and improving mental and physical health and personal relationships in the process.
Dom, who originally hails from France, says the Coolum walking footballers are a fun crew and a great mix of people from a wide range of local, interstate and international backgrounds including from Scotland, The Netherlands, England and New Zealand.
The footballers are aged from 45 up to their 70s.
Dom said some have played Football (soccer) before when they were younger and others had never played before.
He said it’s easy to pick up the sport, no matter what your level of movement or experience is.
“There’s no physical contact and no tackling,” Dom said.
“It’s 6 players on each side and the ball stays below shoulder height… it’s about ball control and just getting to the ball as quickly as you can (walking) … we’re not out there to smash each other!”
One of the more senior members of the WFC, Martin who is in his 70’s, says walking football is “really, really good..keeps me fit and keeps the mind sharp”.
Another senior, Tony, says the ‘camaraderie is great’ and Mark, a retired Rugby League coach whose knees are “shot” said he can still play and enjoys the fitness.
One of the women players, Karen, drives from Nambour to play.
“The guys are fabulous,” she said “I’ve improved so much…it doesn’t matter what your level is … and it’s not too impactful and keeps you flexible.”
Coolum Walking Footballers are looking for more players (men and women) to join so they can put together a mixed social team as well as add to the current successful men’s tournament team (the women almost have the numbers to make a team but need more).
Why not celebrate this month’s International Men’s Health Week 2021, June 14-20, and try Walking Football?
Phone Dom on 0408 853 468 or email
dom@greenpet.com.au.
You could also come and watch the play on a Monday night from 5pm, on the Coolum Crusaders soccer ground located at the Coolum Sports Complex, 1946-1974 David Low Way (behind the Coolum RSL).
All you need to play is a pair of runners or soccer boots, some water and $5 to cover ground hire.
Games are broken into quarters and last until about 6.30pm with water breaks.
Dom and the team will make you very welcome.

For more information about the teams and to keep track of the latest season, see the Coolum Walking Football Facebook page at https://www.facebook.com/groups/2373176716040867/